Zeus - King of all Gods - aspiredental 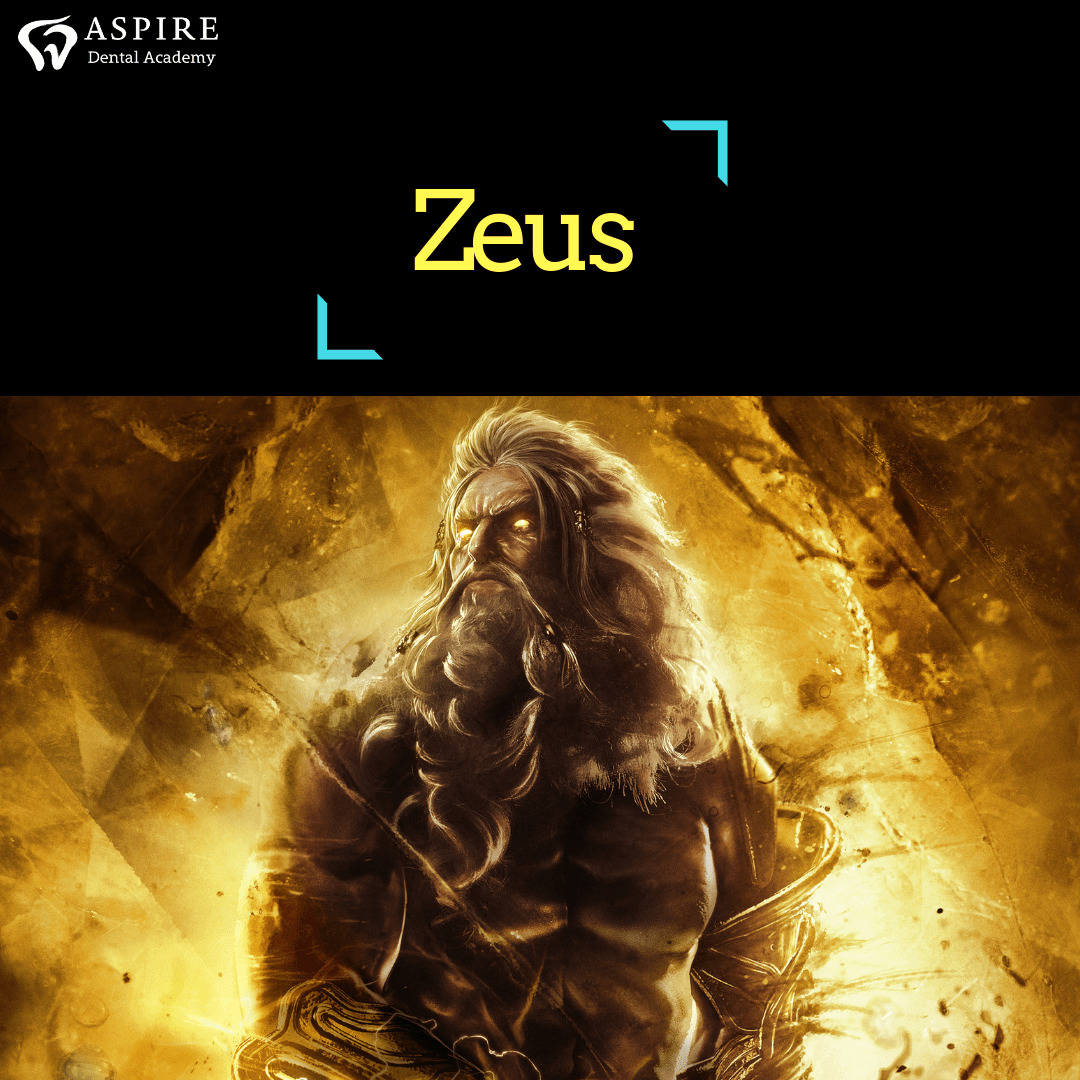 Zeus – King of all Gods

Zeus. King of all the Gods. His wife is a goddess; his many girlfriends are all 10/10s or other goddesses. He lives in a glowing palace on top of a mountain and is King of the Universe. All the other gods bow to him, every creature alive fears and respects him. He is the King.

King of the Gods.

Interestingly, the ancient Greek gods differ from modern deities, as they are considered fallible. They experienced jealousy, greed and anger. They were prone to lustful thoughts (especially old Zeusy!) and sought revenge against those they perceived as needing a lesson.

Like us, they indulged in debauched excesses of all sorts and craved power.

Greek mythology, so extensively studied, written about and depicted, makes no secret about the inherent value of beauty. Be it human beauty, architectural or scenic. It doesn’t matter they just loved it. And Aphrodite was simply smoking, rocking, impossibly, unbelievably hot.

I’ve never met her…shame, but I can imagine how beautiful she was. The image of beauty means something to me despite it being thousands of years old. I can picture Aphrodite and so can you.

Beauty hasn’t changed and never will.

Beauty is a commodity, and beauty is power. Anyone that went to school knows how human popularity hierarchies arrange themselves—around looks. Beauty is DNA-deep.

This bigger question is: In addition to good looks, what gift would you bestow on the future King of the Gods when he is destined to own and run and rule it all already?

Everything is destined to be his, to be taken by force, smart thinking or a massive thunderbolt. So what gift can you offer that is of any worth to such a person?

An Apple Watch? No, he knows the time: He controls Apollo and Helios as they carry the sun across the sky. Something from Fortnum’s? It won’t be a patch on the Ambrosia he already has.

Only one person was ever in a position to offer gifts to the mightiest being in existence—his teacher when he was very young, Metis.

Metis was summoned by Rhea, Zeus’ mother, to teach him in preparation for his tumultuous future, ultimate glory and thence endless responsibility.

Metis was a good choice as teacher. Her name is synonymous with deep thought, wisdom and prudence.

What is really interesting is what she offered as her gift of education—what she chose to instill in this person who had the most serious of tasks ahead.

The first task was an Avengers-Infinity-War-level battle with the God’s rival, the Titans. If that war could be won he was then to assume the role of King of the Gods, the Universe and Everything.

The educational curriculum would be important. Perhaps Krav Maga would be best, or maybe how to throw a thunderbolt with more accuracy and power….

Real power needs something else.

It needs the big guns. It means teaching emotional intelligence and social skills.

She was to teach him patience, craft and guile.

To quote his exact educational personal development plan signed off by the GDC:

‘To look into the hearts and judge the intentions and desires of others, learn how to reason, how to find the strength to let passions cool before acting, how to make a plan and change or abandon it as needed, how to let the head rule the heart but let your heart win the affection of others’

What did those lessons teach? Call it soft skills, call it social or emotional intelligence. Call it effective empathy. You can call it being a smooth operator, if you like; it amounts to the same thing.

The ancient Greeks knew the value of beauty and cherished it. No doubt Zeus was a looker. But they also knew if he was going to be successful and become the boss he needed to be, then he needed soft skills.

They are meta-principles for life: The human pursuit of the former is eternally relentless, and the enormous value of the latter is eternally demonstrable and treasured most by those who already posses it.

We aren’t here to make you beautiful—although a lot of your patients will walk in requesting you do exactly that for them.

Becoming socially intelligent, however… Well, I believe we have a duty to help with that.

Being socially intelligent is so important it hurts to see other humans struggle with it. Channel 4 makes a programme about it so you can all laugh as its participants limp towards loneliness and ridicule. They are so brazen and audacious about their right to laugh they even name it so you know exactly what you are watching when you tune in to “Undateables”.

Social intelligence is so important; it’s a story told a million times every day, everywhere, since time began: The charismatic charmer, the guy with the gift of the gab, the loved kind nurse, the popular kid, the adored leader, the person everyone likes, the person always first to be invited to the party, the one making everyone laugh, the person everybody wants to please, the person you would never want to offend…them. As regards dentists, even when their treatments are just average or even below average, their patients JUST LOVE THEM. “The best dentist I have ever met”…the socially intelligent dentist.

It took me a long time to believe it was possible to deliver the gifts that Metis developed in Zeus and then to make them effective: To give delegates transferable and usable skills in social intelligence. To give them skills in reading hearts and minds, micro expressions, practised conversations along congruence, and authenticity to their external voice and body language. To give them power to make their patients feel listened to cared for and valued. To give them power to make their patients really truly genuinely like them. As well as recognise threats and avoid them.

I had to meet the right experts and teachers to believe giving these skills is possible. I know it’s possible now; I know it works. It’s taken just over ten years to put it together.

I hope we can share this with you soon. Click to book a place on the Dental Emotional Intelligence Programme which will give it all to you.


If you enjoyed this article you will enjoy our free webinars, if you would like a personal invite let us know: